Creative conducting on the fly

“A couple weeks ago I got one of those [out of the blue] calls, which in this time of the pandemic is rather the last thing I expected to be happening right now. I was more than shocked to find a message from the director of the Rome Opera House Ballet, Eleonora Abbagnato asking me if I could come and record a ballet we had done together when she was an “étoile” (literally star in English) of the Paris Opera Ballet.

“With the rollout of the COVID vaccine proceeding, we join the rest of the world in hoping that within the next 12 months we will see the end of pandemic restrictions. We are hoping for an incredible return to normal concert conditions, with a superb lineup of concerts and events that will truly be celebratory in nature.

“The glass is definitely at least half full at the Traverse Symphony this season!

While that normally wouldn’t sound like an overly positive statement, in the era of COVID, for the performing arts it’s a godsend. For an industry which relies upon as many people as possible collecting in a specific place at a specific time, the challenging times in which we find ourselves is unlike anything those of us alive today have experienced.”

“I am already looking forward to the future when we can once again hear first-hand the rich smooth tones of the trombones, the low rumbling of the tympani, the distinctive voice of the clarinet and the harmonic sounds of the string sections.”

“What I’ve learned, though, is what is valuable is not talent, but creativity — and creativity can be taught. … When there is no roadmap to follow, we need the innovators, those who are practiced in creativity.”

A new era of ‘Rambo-style’ home production, and hope for the future

“Planning, even in the best of times, requires a great deal of hope. It always has a certain stab-in-the-dark quality to it — and hope — both of which have never been stronger that right now.”

We will appreciate being together when the time comes

“I never imagined a moment in time when it would be forbidden to come together to play and listen to live music, but that time has arrived.
I look forward to its end.”

We are moved by Beethoven’s struggle

“2020 is here and along with it, the 250th Anniversary of the birth of Ludwig van Beethoven, one of the greatest geniuses and humanists the world has ever known.”

What I actually do

‘What do you actually do?” In the nearly 40 years since I first received a few dollars to conduct as a teenager, that is the question I’m most often asked.

Music, art and all things cultural as well as geopolitical reached a precipice in the early 20th century which resulted in World War I. Certainly the industrial revolution played a role in that event, as it also did in the creation of the figure of Richard Wagner.

Perched high on my stool, overlooking a vast sea of stringed instruments, I always wonder to myself if I might have the best seat in the house. 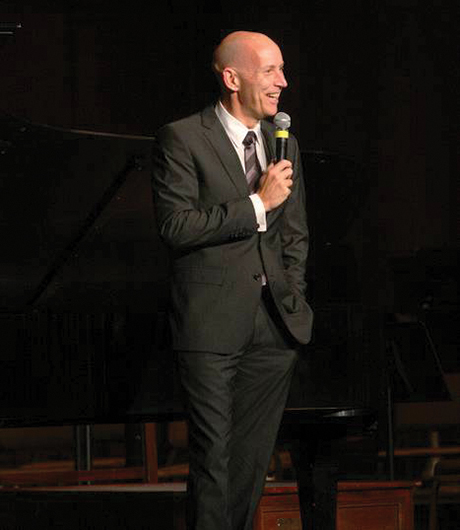